It's time for some friggin' Deerman! 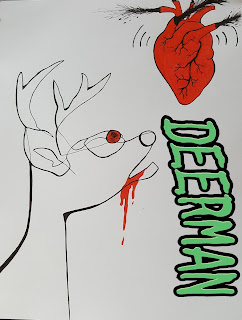 Join Deerman as he happens upon a seemingly benign family-friendly restaurant during the day. Listen as Deerman discovers what he truly is as he finds his hoofing in the world.

Please consider becoming a patron over at Patreon. Just a buck a month goes a long way. You'll get early access and little extras sprinkled in here and there. Clickity-click-click here!

You don't want to be a patron, that's cool. I get it. But you likely shop a little bit at Amazon, right? Why not click on this link to do your shopping? It adds nothing to your cost but it gives me a sweet kickback that helps support the show. Clickity-clickity-cluck here.

The more me and the Mancat drove around aimlessly, wasting our days, the more I noticed that old west style wanted signs were being posted around all over the goddamn place. There was even one at Los Cazadores Musical, a Chuck-E-Cheese rip off that sold Tex-Mex and Tecate.

“Pull over,” I told Warning.

He parked in the handicap spot. It was something I was always uncomfortable with but if anyone came up and gave us shit, I’d be flabbergasted. And I don’t use that word lightly. I’m a fucking bipedal deer. He’s a naked guy who wants to be a cat. If handicap we’re not, then what is?

“We’re just going to walk in there casually, you know?” I said.

“Meow,” Warning said but his eyes betrayed an inner doubt.

“Yeah,” I said, rubbing my hoof on my chin. “Maybe you should stay in the car.”

Warning nodded. It’s one thing to believe you’re a cat. It’s another thing to walk into a family restaurant naked with a deer.

There was no rush, though. When I got inside, there wasn’t even a hostess to greet me. The place was damn near empty. There was trash everywhere and a few old men smoking cigarettes staring at the stage.

“Hey, bud,” an old man with no teeth said to me from behind his pitcher of beer. “You here for the show?”

“Well,” the old man said, lighting a cigarette. “Don’t let me stop you from doing your thing.”

“Isn’t this a family restaurant?”

“On the weekends, yes. During the day, it’s a little bit different.” He motioned his work-beaten hand to showcase the room. It was filled with smoke and sparsely populated with people drinking straight from the bottle. “During the day, my friend, we smoke and sing and dance with El Gran Cazador Blanco Con Pelo Amarillo. He makes us laugh.”

“Yeah,” I said. I took a seat near the middle of the folding chairs that were chaotically arranged throughout the restaurant.

All the lights went out as I settled in. It’s hard sitting on a tail. I still haven’t gotten used to it.

A spotlight shone on the curtains where a short man in a beige leisure suit came out. He looked shy.

“Amigos!” he yelled, “Did I not promise you a grand show today?”

The crowd clapped a little bit more. Not much.

“This dumb white guy thinks we like him,” an old man leaned into me and said as he exhaled his cigarette smoke. “He comes in here and thinks because he speaks Spanish, he’s one of us. Thinks because he married the owner’s daughter that we like him. Bullshit. We know he’s only after the restaurant when the old man dies. He wants to turn it into a condo with an office for Senator Teodoro Luz at the ground floor. He thinks we like Luz because his name ends in a z. We just come here to laugh at him.”

“Ouch!” the old man yelled. I turned and saw that my antler had split his left nostril in half when I nodded.

“I bet you’re Teodoro Luz under there, aren’t you?” The old man started poking at me. It tickled but I couldn’t laugh anymore. Laughing was a human thing. Deer don’t laugh. Deer get revenge. And I’ve been running around in circles for too fucking long.

I stood up and knocked the chair in front of me down. I started bucking like a race horse who hates the feeling of having a really small guy sit on top of him and whip him into speed. I charged El Gran Cazador Blanco Con Pelo Amarillo.

This man didn’t deserve the passionate end of my hooves, the angry tips of my antlers, but I was bored with running around. I was tired of being a deer. I was tired of hanging around with some pervert that keeps up the charade of being a man with a cat brain even after he admitted to me it was just a ruse to satisfy some weird sexual desire that he couldn’t even find like-minded freaks on the internet.

Nobody asked me if I wanted to be a deer. If you ask me, I would’ve been better off bleeding out on the highway. At least somebody would find me and Brenda wouldn’t be sitting on the edge of her bed wondering where I went; if I ran off with some California hussy or if I killed myself. If I was killed by a serial killer who could overpower me, of all people.

“I promised a show today, no?” El Gran Cazador Blanco Con Pelo Amarillo yelled. “Now this muchacho was not a part of this show. But now he is! And we’re all the better for it, no!?”
I fell to the ground and stared up at him. His pants were wet. He was scared. But he had weapons. I just had fucking antlers and a burning passion for revenge. Friends, sometimes the latter is more than gunpowder can ever provide.

“The show, amigos, must go on!” El Gran Cazador said. The curtains went up. His animatronic band went into a steady rhythm with a surprisingly complex emotional composition for a band made of robots.

He sang, “Cada vez que entro en un restaurante mexicano se vuelve menos auténtico. Cada vez, cada vez.” He grabbed his dick and spun around like a cheap Michael Jackson. A screen came crashing down from the ceiling. On it, the first slid of a PowerPoint presentation was illuminated. It read: The Future of Los Cazadores Musical.

El Gran Cazador Blanco tugged at a rope that hung on center stage. A cage with a young woman and her father came crashing down. It took out the first row of chairs, killing one spectator. El Gran Cazador laughed. “Nobody will miss him!” El Gran Cazador pranced towards me in his white cowboy boots. He unbuckled his pants knowing I couldn’t lift myself off the ground.

But I had antlers. And I was getting a lot more familiar with how to use them. I pummeled forward, impaling the little idiot and lifting him off the floor. I shook my head and he flew off, hitting the wall.

His urine stained pants were now covered in blood.

The crowd stood and cheered.

“My husband!” the young lady clutched at her heart  and reached for El Gran Cazador Blanco from her cage. Her father was unconscious.

“That idiot never loved you!” said a voice from the crowd. “He was just after your father’s property!”
But El Gran Cazador Blanco wasn’t finished. He pulled himself off the floor and stumbled toward the cage.

“It’s true, my love. I’m sorry but money is more important than authenticity. This is America.” He pointed his pistol, trembling, at the father. “I made sure he willed this to me before he died. Now I’m speeding up the process.”

I dragged myself across the stage, bleeding and practically useless. I poked at him with an antler but he must have been in some kind of greedy trance. He didn’t even turn around. I stuck my antler into the stage and used my weight to do a spinning kick on the floor. He fell flat on his ass, fell face first into my antler.

“Tell…” he said with his gasping last breaths, “Tell everyone my name… mi nombre es Blake Gentle. I fought valiantly.”

The crowd descended on me and helped me unstick myself from the stage.

One of them came up with one of the wanted posters.

“It’s him!” he said. I was scared but I was also in a lot of pain and jail would probably fix me up or put me out of misery.

I rest my head on the stage and closed my eyes. I heard sirens in the distance. The front door opened, bringing in unwanted sunlight.

“Hey! Let’s get the fuck outta here! The cops are on their way!”

It was Warning. Sliding in and talking like a real fucking human to save our asses. He ran up to me, flopping around in the air, not a care in the world.

“We’ll help,” the father in the cage said to Warning. A group of men surrounded me and lifted me up, carrying me into the truck bed. I was woozy. My eyes were tired. The sun blinded me.

“You saved my father’s business,” the young woman said. She kissed me on the cheek. “You’re a hero,” she said as she peeled her late husband’s face off of my antler.

Deerman, Episode 9 is live for patrons! 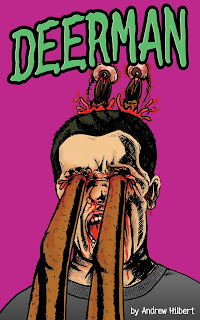 Please consider supporting Deerman on Patreon by clicking here. All it takes is a buck a month to read every episode before they go public!

Consider buying a Deerman tshirt for the weirdo in your life by clicking here.

Or use this Amazon link to buy whatever your heart desires. It adds nothing to your cost; it just gives Deerman a sweet, sweet, slice of money pie so we can grow. 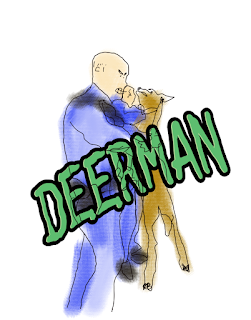 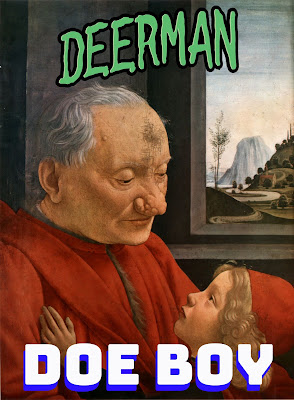 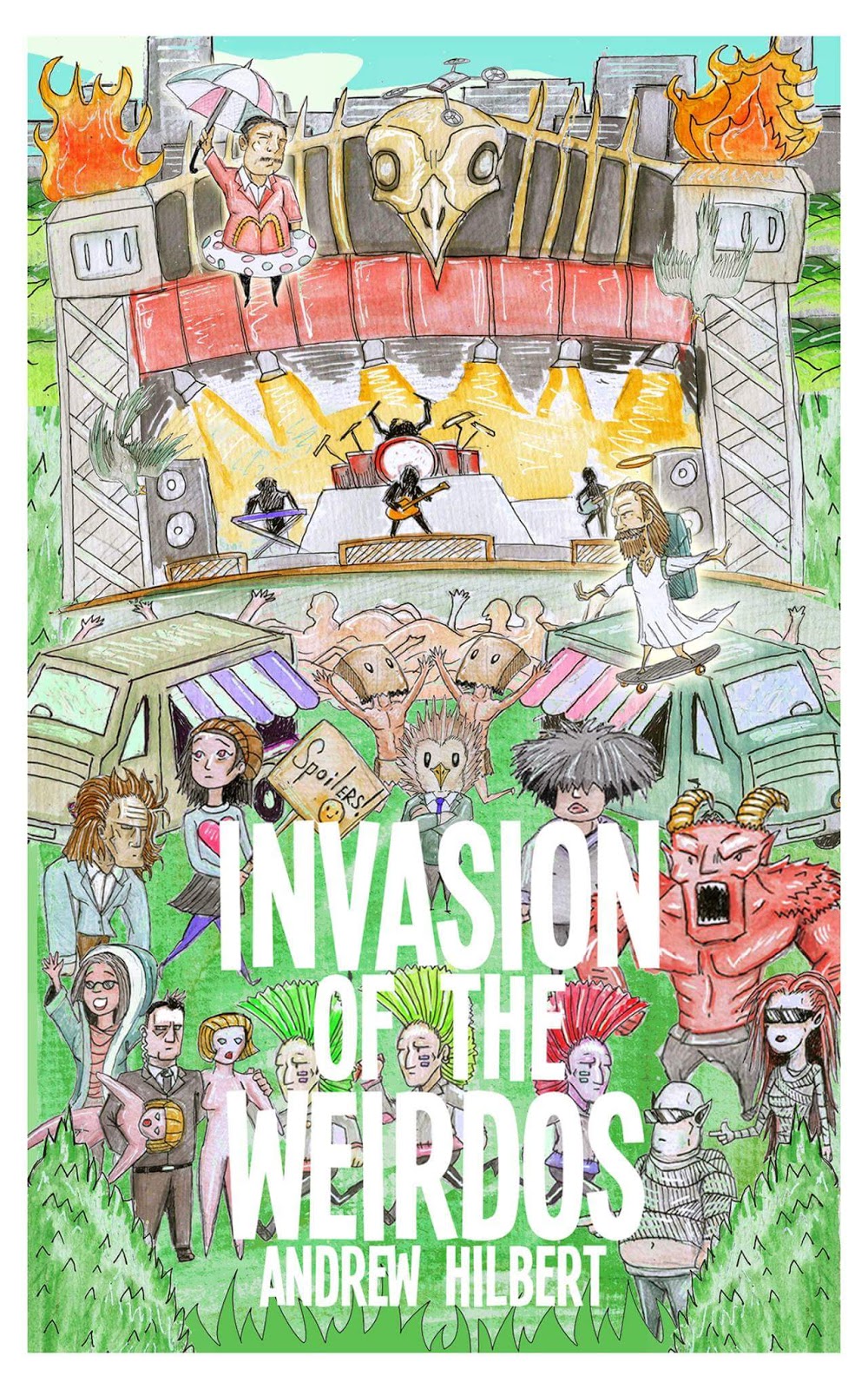 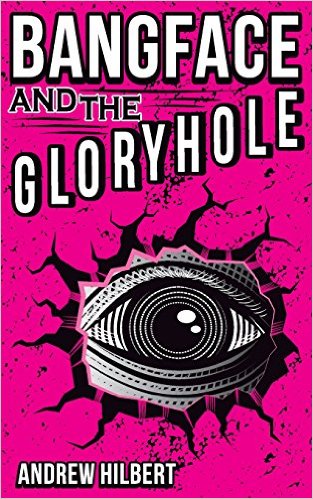 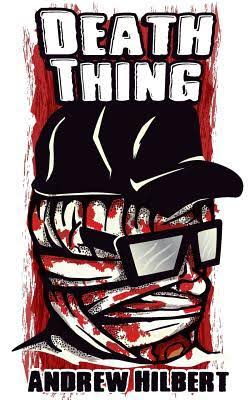